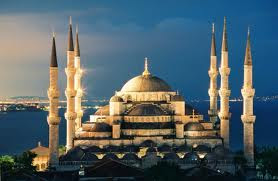 About The Country of Turkey

At the crossroads between Europe and Asia, Turkey is a fascinating country. Dominated by Greeks, Persians and Romans in turn throughout the classical era, what is now Turkey was once the seat of the Byzantine Empire.


In the 11th century, however, Turkish nomads from Central Asia moved into the region, gradually conquering all of Asia Minor. First the Seljuk and then the Ottoman Turkish Empires came to power, exerting influence over much of the eastern Mediterranean world, and bringing Islam to southeast Europe. After the Ottoman Empire fell in 1918, Turkey transformed itself into the vibrant, modernizing, secular state it is today.


Is Turkey more Asian or European? This is a topic of endless debate. Whatever your answer, it's hard to deny that Turkey is a beautiful and intriguing nation.


The judicial branch of government in Turkey is rather complicated. It includes the Constitutional Court, the Yargitay or High Court of Appeals, the Council of State (Danistay), the Sayistay or Court of Accounts, and military courts.


Although the overwhelming majority of Turkish citizens are Muslims, the Turkish state is staunchly secular. The non-religious nature of Turkish government has historically been enforced by the military, since the Republic of Turkey was founded as a secular state in 1923 by General Mustafa Kemal Ataturk.

Kurds make up the largest minority group at 18%; they are concentrated primarily in the eastern portion of the country, and have a long history of pressing for their own separate state. Neighboring Syria, and Iraq also have large and restive Kurdish populations - the Kurdish nationalists of all three states have called for the creation of a new nation, Kurdistan, at the intersection of Turkey, Iraq and Syria.

Turkey also has smaller numbers of Greeks, Armenians, and other ethnic minorities. Relations with Greece have been uneasy, particularly over the issue of Cyprus, while Turkey and Armenia disagree vehemently over the Armenian Genocide carried out by Ottoman Turkey in 1915.


The official language of Turkey is Turkish, which is the most widely-spoken of the languages in the Turkic family, part of the larger Altaic linguistic group. It is related to Central Asian languages such as Kazakh, Uzbek, Turkmen, etc.


Turkish was written using the Arabic script until Ataturk's reforms; as part of the secularizing process, he had a new alphabet created that uses the Latin letters with a few modifications. For example, a "c" with a small tail curving beneath it is pronounced like the English "ch."


Kurdish is the largest minority language in Turkey, and is spoken by about 18% of the population. Kurdish is an Indo-Iranian language, related to Farsi, Baluchi, Tajik, etc. It may be written in the Latin, Arabic or Cyrillic alphabets, depending upon where it is being used.

Turkey is approximately 99.8% Muslim. Most Turks and Kurds are Sunni, but there are also important Alevi and Shi'a groups.


Turkish Islam has always been strongly influenced by the mystical and poetic Sufi tradition, and Turkey remains a stronghold of Sufism. It also hosts tiny minorities of Christians and Jews.


Turkey has a total area of 783,562 square kilometers (302,535 square miles). It straddles the Sea of Marmara, which divides southeastern Europe from southwestern Asia.


Turkey's small European section, called Thrace, borders on Greece and Bulgaria. Its larger Asian portion, Anatolia, borders Syria, Iraq, Iran, Azerbaijan, Armenia, and Georgia. The narrow Turkish Straits seaway between the two continents, including the Dardanelles and the Bosporous Strait, is one of the world's key maritime passages; it is the only access-point between the Mediterranean and the Black Sea. This fact gives Turkey enormous geopolitical importance.


Anatolia is a fertile plateau in the west, gradually rising to rugged mountains in the east. Turkey is seismically active, prone to large earthquakes, and also has some very unusual landforms such as the cone-shaped hills of Cappadocia. Volcanic Mt. Ararat, near the Turkish border with Iran, is believed to be the landing-place of Noah's Ark. It is Turkey's highest point, at 5,166 meters (16,949 feet).


Turkey's coasts have a mild Mediterranean climate, with warm, dry summers and rainy winters. The weather becomes more extreme in the eastern, mountainous region. Most regions of Turkey receive an average of 20-25 inches (508-645 mm) of rain per year. The hottest temperature ever recorded in Turkey is 119.8° F (48.8° C) at Cizre. The coldest temperature ever was -50 °F (-45.6° C) at Agri.


Turkey is among the top twenty economies in the world, with a 2010 estimated GDP of $960.5 billion US and a healthy GDP growth rate of 8.2%. Although agriculture still accounts for 30% of jobs in Turkey, the economy relies on industrial and service sector output for its growth.


For centuries a center of carpet-making and other textile trade, and a terminus of the ancient Silk Road, today Turkey manufactures automobiles, electronics and other high-tech goods for export. Turkey has oil and natural gas reserves. It is also a key distribution point for Middle Eastern and Central Asia oil and natural gas moving to Europe and to ports for export overseas.


>Naturally, Anatolia had history before the Turks, but the region did not become "Turkey" until the Seljuk Turks moved into the area in the 11th century CE. On August 26, 1071, the Seljuks under Alp Arslan prevailed at the Battle of Manzikert, defeating a coalition of Christian armies led by the Byzantine Empire. This sound defeat of the Byzantines marked the beginning of true Turkish control over Anatolia (that is, the Asian portion of modern-day Turkey).

The Seljuks did not hold sway for very long, however. Within 150 years, a new power rose from far to their east, and swept toward Anatolia. Although Genghis Khan himself never got to Turkey, his Mongols did. On the 26th of June, 1243, a Mongol army commanded by Genghis's grandson Hulegu Khan defeated the Seljuks in the Battle of Kosedag, and brought down the Seljuk Empire.

Hulegu's Ilkhanate, one of the great hordes of the Mongol Empire, ruled over Turkey for about eighty years, before crumbling away around 1335 CE. The Byzantines once more asserted control over parts of Anatolia as the Mongol hold weakened, but small local Turkish principalities began to develop, as well.

One of those small principalities in the northwestern part of Anatolia began to expand in the early 14th century. Based in the city of Bursa, the Ottoman beylik would go on to conquer not only Anatolia and Thrace (the European section of modern-day Turkey), but also the Balkans, the Middle East, and eventually parts of North Africa. In 1453, the Ottoman Empire dealt a death-blow to the Byzantine Empire when it captured the capital at Constantinople.

The Ottoman Empire reached its apogee in the sixteenth century, under the rule of Suleiman the Magnificent. He conquered much of Hungary in the north, and as far west as Algeria in northern Africa. Suleiman also enforced religious tolerance of Christians and Jews within his empire.

During the eighteenth century, the Ottomans began to lose territory around the edges of the empire. With weak sultans on the throne, and corruption in the once-vaunted Janissary corps, Ottoman Turkey became known as the "Sick Man of Europe." By 1913, Greece, the Balkans, Algeria, Libya and Tunisia had all broken away from the Ottoman Empire. When World War I broke out along what had been the boundary between the Ottoman Empire and the Austro-Hungarian Empire, Turkey made the fatal decision to ally itself with the Central Powers (Germany and Austria-Hungary).

After the Central Powers lost World War I, the Ottoman empire ceased to exist. All of the non-ethnically Turkish lands became independent, and the victorious Allies planned to carve Anatolia itself into spheres of influence. However, a Turkish general named Mustafa Kemal was able to stoke Turkish nationalism, and expel the foreign occupation forces from Turkey proper.

On November 1, 1922, the Ottoman sultanate was formally abolished. Almost a year later, on October 29, 1923, the Republic of Turkey was proclaimed, with its capital at Ankara. Mustafa Kemal became the first president of the new secular republic.

In 1945, Turkey became a charter member of the new United Nations. (It had remained neutral in World War II.) That year also marked the end of single-party rule in Turkey, which had lasted for twenty years. Now firmly aligned with the western powers, Turkey joined NATO in 1952, much to the consternation of the USSR.

With the republic's roots going back to secular military leaders such as Mustafa Kemal Ataturk, the Turkish military views itself as the guarantor of secular democracy in Turkey. As such, it has staged coups in 1960, 1971, 1980 and 1997. As of this writing, Turkey is generally at peace, although the Kurdish separatist movement (the PKK) in the east has been actively trying to create a self-governing Kurdistan there since 1984.