The Cities Of Cappadocia

The Cities Of Cappadocia 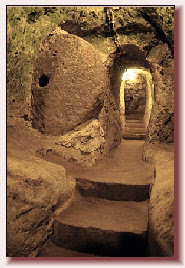 Is Cappadocia, a "Stargate of the Ancients" or some kind of time gate to other dimensions? Who were the ancient architects capable to build complex underground societies? Was an alien technology involved in achievements clearly visible even today? Many very old records of all civilizations mention subterranean tunnels, caves and cities which existed in various places around the world. One of such mysterious places is Cappadocia covering the area of approximately 100 x 100 km and located 29 km from a provincial town Nevsehir in the central part of Turkey. Most popular theory is that these remarkable underground places served as temporary protective shelters for people on the run. Others suggest they were permanent secret communities. Cappadocia’s underground cities cover a large area roughly the size of Switzerland or approximately the size of New Hampshire and Vermont combined. It is not exactly known how many underground communities exist in the area but it is known that the subterranean cities of Cappadocia have a secret past.

There is plenty that is not known about this very ancient place. "Who really were the dwellers of Cappadocia’s cities full of tunnels built over some levels?" Where do all the tunnels lead? Could they lead to another unknown subterranean realm hidden somewhere under the Himalayas and known as Agartha Cappadocia a "Stargate of the Ancients" - is much more than only long tunnels but also an extensive system of passages, stepped pits and secret corridors connecting diverse rooms. Even if we do not know who exactly lived there, we can imagine they lived as comfortably as possible. The cities were equipped with water tanks, wells, diverse stores, chimneys for air circulation, niches for oil lamps, stores, stables and other useful areas. The cities extend more than twenty floors under the surface but many of them still have not been excavated. How was all unneeded stone material removed to achieve all this? 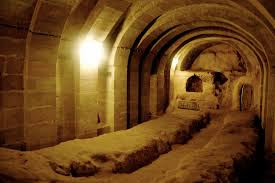 
One of many impressive architectural achievements of unknown engineers of Cappadocia's cities are moving stone doors, resembling mill stones, were devised to quickly block the corridors and could be used only from one side. There have been found only a few relics in tunnels and caves of Cappadocia and these originate from the Hittites who were descendants of Ham, a son of Noah. However, the history of the underground realm of Cappadocia is older than even the Hittites and goes back to the end of the last Ice Age. 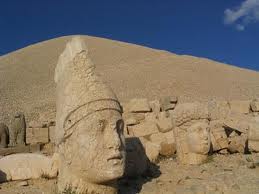 The two largest unearthed communities of about 36 subterranean cities in the area are located at Derinkuyu and Kaymakli. Derinkuyu was capable of accommodating 20,000 inhabitants even within a period of many centuries! It covers a 4 square km area and was calculated as able to shelter 2,000 households on 7 floors beneath the surface, reaching a depth of 70 to 85 meters. This subterranean complex contains 36 kilometres of tunnels over seven levels(!) with numerous living quarters, housing stables, wells, cellars, diverse storage rooms, air shafts and waste shafts.


Considering all possessed evidence of extraterrestrial visitations to earth in prehistory, it is obvious that one or more such visitations could have taken place also in the ancient land of Cappadocia. The Cappadocia region is famous for its UFO sightings. What is the connection between UFOs and the underground cities of Cappadocia? UFO flap over Cappadocia took place in the late 1980s. But even earlier between December 15, 1981 and September 1982 many remarkable UFO sightings have been reported both by local witnesses and media. An increased UFO activity during both day and night was a common occurrence and the observed objects certainly did not look like Venus or balloons. Despite a thoroughful investigation the intense UFO activity has never been explained. 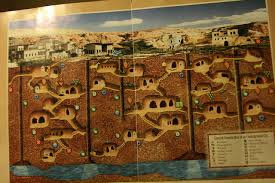 What are the secrets of Cappadocian underground cities and their inhabitants? According to an old Persian legend, Yima, a shepherd was told by God to build a 'var' - an underground city or fortress - to protect men and animals from freezing conditions brought about by an evil demon, but who knows what their reasons were.